Ginger ist a root from South East Asia and over 80 varieties of it exist.

In Asia, ginger is known and used for its antibiotic and immune-stimulating effects. Ginger eases stomach and digestive problems and helps with motion sickness (have it as a tea, cookie or dried).

The benefits of ginger root:

Ginger (Zingiber Officinale)  is one of my most favourite flavours and has immense powers.

It improves blood circulation and relaxes the muscles. It also has a warming, antiseptic and cleansing effect and helps with colds and rheumatism, constipation, water retention and high cholesterol, muscle tension, even with period pains, migraines and headaches.

Ginger is rich in vitamin B6, and can relief pregnant women of morning sickness.

Last but not least, ginger has been effective in cancer treatment, e.g. with growth in the ovaries and colon. It slows down cell growth, and may even prevent it. It also has an analgesic effect and has been used as a painkiller in HIV therapies.

Ginger also prevents kidney damage in diabetics and should only be used avoided by people with Crohn’s disease or gastritis. 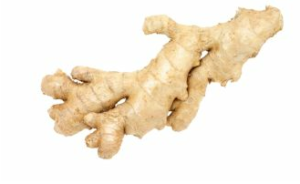 Posted on 7 June 2012 by rohtopia in FOOD, Ingredients0 comments